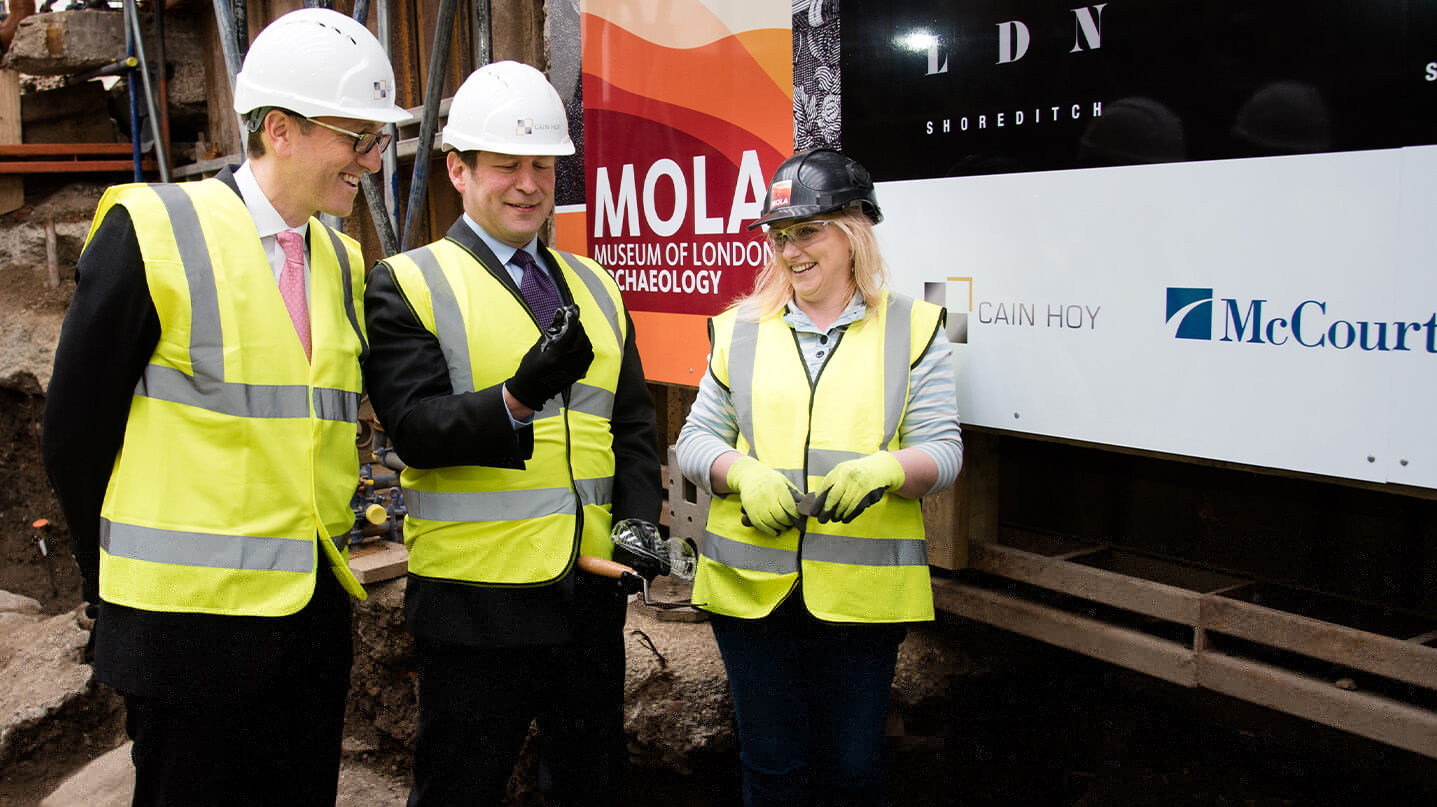 Archaeologists from MOLA have officially begun the detailed excavation of The Curtain Theatre, one of Shakespeare’s least historically documented playhouses, in London’s Shoreditch. The dig was officially launched by Ed Vaizey MP, the Minister of State for Culture and the Digital Economy, today – 400 years almost to the day since Shakespeare’s death.

Evidence for the theatre, revealed through trial excavation at the site of The Stage in 2012, indicates that the remains are exceptionally well preserved, surviving to over 1.5 metres in places. With the detailed dig now starting, archaeologists and the wider community will have a rare opportunity to find out more about one of Shakespeare’s earliest playhouses.

Ed Vaizey MP, Minister of State for Culture and the Digital Economy, said:

“The 400th anniversary of Shakespeare’s death is a fitting time to be excavating this significant historical site. Shoreditch today is one of London’s most vibrant locations, and its prominence as a theatrical hotspot during Shakespeare’s time highlights this area’s enduring cultural appeal.”

The remains of the theatre are approximately two to three metres below modern ground level, and archaeologists are hoping that the remains will provide more clues about the physical structure and use of the theatre, shedding new light on the cultural makeup of the area and performances in the 16th and 17th centuries.

Archaeologists have started digging through the 18th century remains that encase The Curtain Theatre and today’s event marks a major milestone as they begin the excavation of elements from the 16th and 17th centuries. They will particularly be looking for evidence of the stage, the backstage area, the yard and of the stairwells that led the theatregoers able to pay for seats up to the galleries.

Heather Knight, the Senior Archaeologist leading the dig on behalf of MOLA, commented:

“The planning, research and initial site preparations are finished and we’re delighted to be beginning the process of detailed excavation. We hope to find more about the structure of the theatre – where Henry V was first performed – which will give us a clearer indication of how Elizabethan playhouses were used and the evolution of theatre.

“There is also the possibility of finding fragments of props, costumes or items used by the audience, including food remains or drinking vessels, which could tell us more about theatre productions and culture at the time. We look forward to sharing our findings in due course.”

Once the detailed dig is complete, the remains of the theatre will be preserved in-situ, and artefacts discovered and records taken during the excavation will be studied in detail. A display of the finds will sit alongside the theatre remains as part of a cultural and visitor centre at The Stage; a new £750m mixed-use scheme including 33,000 sq. ft. of retail, over 200,000 sq. ft. of office space, and more than 400 homes. The development will also feature over an acre of vibrant public space including a performance area and an urban park. The Stage is a joint venture between Galliard Homes, Cain Hoy, McCourt, Vanke, Investec and The Estate Office Shoreditch.

“The Stage will combine Shoreditch’s past, present and future, by preserving the hugely important Curtain Theatre at the heart of a fittingly world-class development. This mixed-use scheme, set to be a centrepiece in East London, blends outstanding offices, retail and residences with exceptional public amenities, all with an appreciation for the site’s underlying rich history.”

A series of events for the public has also been organised around the excavation and to tie in with the Shakespeare400 celebrations. The calendar is available at www.thestageshoreditch.com, www.mola.org.uk/events and www.shakespeare400.org.